People often feel relieved when they are initially diagnosed with gluten intolerance or celiac disorder. Gluten can cause serious health issues, and most people feel better when they know the source of those issues. 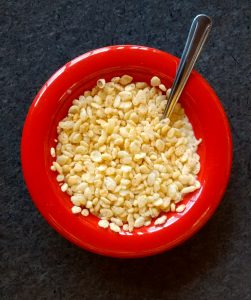 With that said, a diagnosis can also be a source of frustration. If your doctor is advising you to stay away from gluten, there are a lot of foods that you are going to have to get up.

One of the things that many people are concerned about is cereal. A lot of cereals contain malt flavoring or grain, which means that people avoiding gluten need to avoid these cereals.

Are Rice Krispies gluten free? Read on to find out whether or not you can keep enjoying this cereal.

The Gluten In Rice Krispies

Although the recipe for Rice Krispies has had a few changes over the years, the traditional cereal does contain gluten. It is made from barley, which is not safe for people with gluten intolerance to eat. If you have Rice Krispies in your home, you are going to have to find a healthy replacement.

While the traditional version of Rice Krispies does contain gluten, fans of this cereal don’t have to give it up. Kellog offers a version of the cereal that is specifically designed for people with celiac disease or gluten intolerance.

This cereal is very similar to the traditional Rice Krispies recipe. However, rather than being made from wheat — which contains gluten — the cereal is made from whole grain brown rice.

This version of Rice Krispies is incredibly nutritious, and it is completely safe for people that are gluten intolerant to eat.

If you cannot find this version of Rice Krispies cereal at your local grocery store, there are a few other cereals you may want to try. Nature’s Path Crispy Rice Cereal, which is made from brown rice flour, reminds a lot of people of Rice Krispies. Barbara’s Organic Brown Rice Crisps are another healthy and delicious option.

If gluten makes you ill, you should stop eating Rice Krispies. However, you should know that there are plenty of ways for you to enjoy the taste of this delicious cereal.

Manufacturers are aware that a lot of people are unable to tolerate gluten. Because of this, a lot of food products are clearly labeled as being gluten free.

With that said, you are going to want to learn to check the labels of every food product that you buy. Don’t pick up a box of Rice Krispies — or any other type of cereal — unless you have confirmed that they do not contain gluten.

Are Rice Krispies gluten free? Unfortunately, the answer to that question is NO. With that said, you don’t have to say goodbye to Rice Krispies for good. Kellog offers a gluten free version of this beloved cereal, and there are a lot of other healthy gluten-free rice cereals. Giving up gluten doesn’t have to mean giving up the foods you love.